Shell & BP Jump Into EV Charging With Both Feet 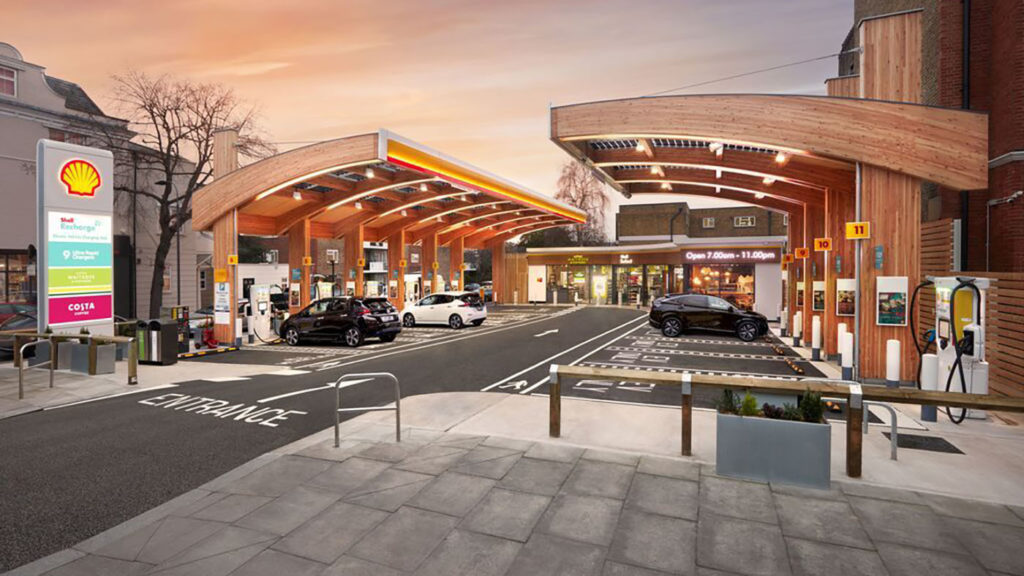 Both Shell and bp are getting involved in EV charging networks as they look to transition from oil and production to the green economy.

You are here: Home / News / Shell & BP Jump Into EV Charging With Both Feet

The sleepy subject of EV charging has suddenly become a hot topic. And why not? With $5 billion in government money on the table, everyone is rushing to gorge themselves at the public trough. This week, Shell and BP have both made major moves to get in on the feeding frenzy.

According to a press release dated January 18, Shell USA, a subsidiary of Shell plc, has signed a definitive agreement to acquire 100% of the outstanding shares of Class A common stock of Volta Inc. in an all-cash transaction valued at approximately $169 million.

Beyond providing a charging service, Volta specializes in generating advertising revenues from screens embedded into the charge point. Volta’s advertising capability and early mover advantage have allowed the company to secure prime spots and portfolio level contracts with site hosts in high value, high traffic markets. Many Volta charging stations are free to use, thanks to the advertising revenue generated by their electronic message boards.

The transaction is expected to close in the first half of 2023, subject to shareholder and regulatory approval. Under the terms of the merger agreement. At close, Shell will also repay Volta’s 3rd party debt, estimated at $14 million. As part of the transaction, an affiliate of Shell USA will provide subordinated secured term loans to Volta to bridge Volta through the closing of the transaction.

The closing of the merger is subject to the approval of Volta’s stockholders, the expiration or termination of the waiting period under the Hart-Scott-Rodino Antitrust Improvements Act, and other applicable regulatory approvals and customary closing conditions. Subject to shareholder and regulatory approval, Volta will be a wholly owned subsidiary of Shell USA.

In 2019, Shell purchased Green Lots, an EV charging network that focused primarily on Europe. According to The Verge, that acquisition was carried out by another Shell subsidiary, Shell New Energies, which was subsequently renamed to Shell Recharge Solutions. After the Volta merger is complete, Shell will control over 57,000 EV charging points, most of them Level 2, in the US and Europe. Shell New Energies is also working on other alternative power projects like offshore wind farms in New Jersey.

Tritium is an Australian company founded in 2001. In a press release dated January 17, it says it designs and manufactures proprietary hardware and software to create advanced and reliable DC fast chargers for electric vehicles. “Tritium’s compact and robust chargers are designed to look great on Main Street and thrive in harsh conditions, through technology engineered to be easy to install, own, and use. Tritium is focused on continuous innovation in support of our customers around the world.” Unlike Volta, Tritium focuses on Level 3 DC fast chargers. In fact, its stock symbol is DCFC. This latest press release announced that bp has placed the largest ever order from a single customer in Tritium’s history. bp will install the chargers for fleets and the general public in the United States, the United Kingdom, Europe, and Australia as bp expands its EV charging business known as bp pulse. Why British Petroleum, which used to be called BP, is now using lower case letters to identify itself is not clear. Perhaps it is still embarrassed by the massive oil spill in the Gulf of Mexico at one of its offshore platforms.

“As bp’s EV charging infrastructure grows worldwide, Tritium is a natural choice for this order,” said Richard Bartlett, CEO bp pulse. “Tritium has a global presence and industry-leading DC fast charging technology – we’re looking forward to putting these chargers to work across three continents.” Tritium is supplying the chargers for bp pulse as part of a multi-year contract between the two companies for chargers and related services to support bp’s growth in electrification.

“Tritium envisions a world in which fast EV charging is everywhere,” said Tritium CEO Jane Hunter. “We’re grateful to the bp team for their order and look forward to working together to support bp pulse as they build a reliable, accessible fast charging network around the world. As a result of bp’s order, Tritium’s industry leading fast EV chargers will make it easier than ever before for commercial and everyday drivers to join the e-mobility transition,” she added.

The bp order includes a mix of Tritium 50 kW RTM and 150 kW PKM chargers. Tritium’s RTM is the company’s first modular charger and one of the most advanced DC fast chargers on the market. If is Ideal for network operators, dealerships, and the retail and hospitality industries and features a single person lift power module system for easier power upgrades, maintenance, and serviceability.

Tritium anticipates manufacturing the chargers destined for bp’s European and American markets in the company’s Tennessee factory, which opened in August 2022 and is expected to reach a production capacity of 30,000 units per year at full maturity. The chargers for bp’s Australia markets are expected to be manufactured in Tritium’s Brisbane factory, which has a capacity of 5,000 units per year.

Government policies matter. The Biden administration has proposed a new program entitled the National Electric Vehicle Charging Network. Think of it as being similar to the Interstate highway program that began in the 1950s, which transformed how Americans traveled and how goods got delivered. That program has repaid its initial investment 100 times over by unlocking increases in interstate commerce that have powered America’s economic growth for the past 70 years. The $5 billion allocated to the National Electric Vehicle Charging Network will be used to provide a minimum of 4 fast chargers every 50 miles along America’s major transportation corridors — including Wyoming.

There are plenty of incentives baked into the program and they are having the intended effect. Not only will EV drivers benefit but local communities will also as companies like Tritium build new factories that will provide good paying jobs to hard working Americans. New EV charging and battery factories are under construction thanks to effective, targeted government policies put in place by President Biden and his team.