Diesel-only vehicles fell below 15% of new sales for the second time, as they first did in March this year. Combined with petrol-only sales, these two traditional powertrains still clung on to just over half the market, though at their lowest combined level ever (51.4%). The 50% mark will likely be breached by December. The Renault Megane has led France’s BEV rankings for the past 3 months, and is looking unassailable. Even Tesla’s habitual end-of-quarter push couldn’t displace the Megane in September, with the Model 3 having to settle for 2nd place. The Dacia Spring took 3rd, in a close race with the Tesla and the Peugeot 208. We can’t yet paint a picture of what is happening beyond the top 10, because we still only have “tip of the iceberg” model data for September (look out for Jose’s report later this month).

Did any new models start to appear in France last month (MG4, refreshed Kia Niro, Nissan Ariya, VW ID.Buzz, and more)? We won’t know for a while yet.

The Volkswagen ID.3, having previously averaged under 200 units per month in 2022, saw a relatively strong September performance (632 units), allowing it to appear in 10th rank.

Stepping back to survey the longer-term trends, let’s look at the trailing 3 month picture (note, Hyundai Kona data is not yet available): 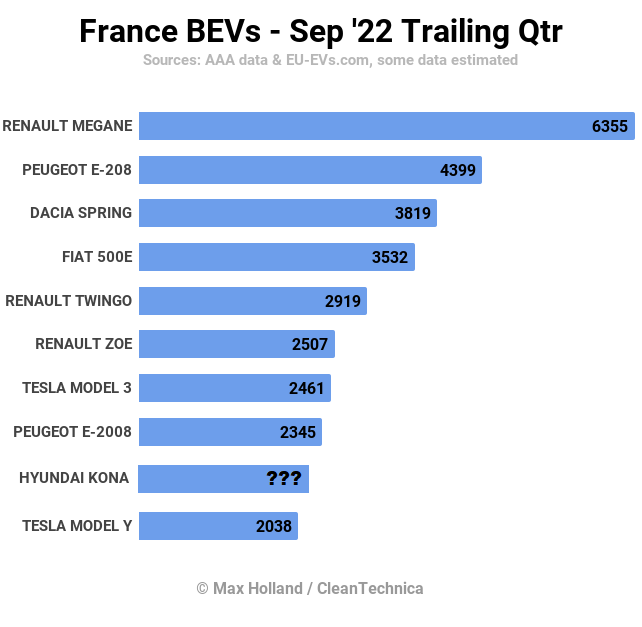 The new Renault Megane has quickly risen to dominate the French BEV market, by a wide margin, since its first high volume deliveries as recently as May.

Other popular models — most of them small cars — the Peugeot 208, Dacia Spring, Fiat 500, Renault Twingo, and Renault Zoe, have shuffled places, but all remain firmly in the top 6.

The Tesla siblings have moved in different directions. The Model 3 has climbed into 7th spot, having been previously outside the top 10, due to lacklustre June volumes. The Model Y was previously in 7th place, but the past 3 months saw it drop to 9th (or perhaps 10th — depending on the Kona’s September numbers).

Here is what we know so far about the notable climbers, compared to the rankings 3 months ago:

Other models suffered the opposite fate, falling in the rankings:

France is Europe’s largest market for affordable BEVs; we can clearly see that the top 10 is dominated by very compact, and relatively affordable models. There is of course still huge demand for even more affordable BEVs, and the upcoming MG4, BYD Atto 3, aka. Yuan Plus, (and BYD Atto 2, aka. Dolphin) should find success, given the appetites of this market.

Stellantis will launch the new Peugeot e-308 in the coming months, and it’s efficiency innovations will be adopted by all the existing group-siblings, a sign that continuous progress is ongoing in the BEV industry. The months ahead will be interesting.

France’s EV transitions continues steadily, and plugin share has just pulled ahead of the UK. Demand is still very high for BEVs, due to high road fuel prices (across all of Europe).

BEVs are taking over from PHEVs now, and — depending on supply constraints — may alone grab 20% of the market in December.

What are your thoughts on the trajectory of France’s EV transition, and the wider auto market, over the coming months? Please jump in to the comments below to let us know.