Volvo Trucks North America spent a week bringing customers, partners, and media out to its customer center in Dublin, Virginia as part of its 2022 Electromobility Summit to showcase the work it has done to lead the electrification of the heavy trucking space. The flagship of Volvo Trucks’ efforts in North America is the Volvo […]

Volvo Trucks North America spent a week bringing customers, partners, and media out to its customer center in Dublin, Virginia as part of its 2022 Electromobility Summit to showcase the work it has done to lead the electrification of the heavy trucking space. The flagship of Volvo Trucks’ efforts in North America is the Volvo VNR, a Class 8 semi truck that carries forward the same look and feel of its predecessors to make it easy for drivers to hop into, but with a power-packed fully electric powertrain and battery system under the hood.

CleanTechnica was on site to spend some time behind the wheel of the VNR on Volvo’s test track, talk to Volvo’s experts, and learn about the path forward for Volvo’s exciting line of heavy duty trucks. The Volvo VNR is in production at Volvo Trucks’ New River Valley factory next door to the Customer Center, with numerous vehicles already in the hands of customers across North America.

Disclaimer: Volvo Trucks paid for the author’s travel and accommodations to attend this event.

Volvo Trucks let customers and select media take a handful of loaded up VNR semi trucks out onto their one mile private test track at their Customer Center in Dublin, Virginia. Because they have so much torque and power, Volvo has done a lot of work to shape the acceleration profile for maximum stability of the load while ensuring sufficient performance for all the typical situations a heavy truck will be tasked with. Several laps around the track made it clear that even with next to no training driving a heavy vehicle like the VNR, it’s easy to hop in and quickly feel comfortable with the simplified controls. The air brakes kick on and off just like in a normal truck and with a simple tap of the Drive button on the dashboard, the vehicle shifts seamlessly into drive and we were off to the races.

With little fanfare, I was rolling down the track, testing out its acceleration and impressive three level regeneration. Much like in passenger vehicles, the regeneration used in the Volvo VNR enables functional one pedal driving for the vast majority of use cases. After my test drive, I was told that the trailer was fully loaded with a 76,000 pound / 34,400 kilogram load, thanks to several pallet loads of sand in the trailer. I couldn’t tell at all and while this could be chocked up to a simple lack of experience behind the wheel of a class 8 truck, the truck didn’t feel like it was struggling at all. It is simply mind boggling how much power electric motors pack into such a small package.

Just look at these little guys (pen for scale): The regen can be adjusted easily by toggling a lever to the right of the steering wheel between one of three levels. This makes it easy for drivers to adjust the amount of regen to suit their needs in the moment. Heading down hill? Kick the regen up to the max to recoup some energy and save the friction brakes. On the test drive, adjusting the regen from level zero all the way up to level three resulted in a similar amount of deceleration as the standard regen in a Tesla Model Y Performance. That’s an impressive feat considering the truck was also slowing down the inertia of the full load in the trailer. The regen felt very controlled and confident in each of the different trucks tested.

Fully electric power trains promise and deliver a nearly silent ride, eliminating just about all of the harsh vibrations that are common with the massive diesel engines that typically power these massive vehicles. Similarly, the two-speed transmission in Volvo’s VNRs is fully automatic with the single shift happening as the vehicle moves from low speeds under 24 miles an hour up to higher speeds. This enables optimum efficiency and ensures the twin electric motors are providing the best balance of power and torque to the ground when the driver needs it. 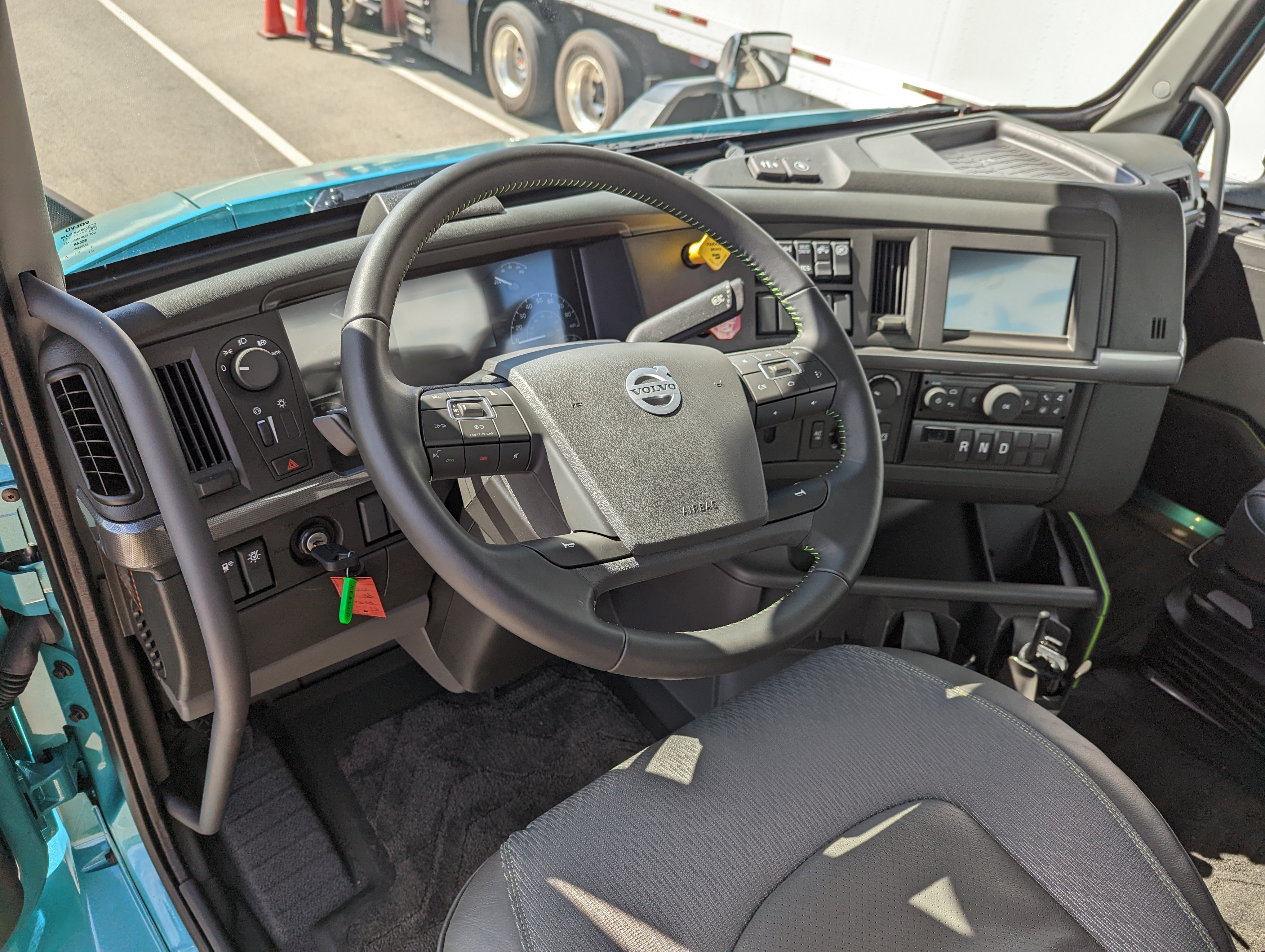 The interior and controls of the Volvo Trucks VNR are largely unchanged compared to its diesel predecessor. Image credit: Kyle Field, CleanTechnica

On the power front, these tiny twin motors paired with the two-speed transmission come in a tiny bundle that seems smaller than the engines found under the hood of a passenger vehicle. Comparing it side by side with Volvo’s massive diesel power plants and transmissions from legacy combustion-fired trucks, the twin electric motor and transmission combination are roughly the same size as the transmission. This translates to some serious weight savings in the motor department. Of course, any weight savings coming from the engine bay are quickly offset by the large battery packs that provide the energy needed to power the twin electric motors.

Regeneration and acceleration are two of the many metrics Volvo has built into the telematics system it developed in-house. Having fully integrated telematics from the OEM building the truck allows fleet operators to track key metrics on a driver by driver and trip by trip basis. Metrics like regeneration, acceleration, kilowatt-hour consumption, and efficiency are critical inputs in calculating things that actually matter to fleet managers like the overall cost of doing business in time, kilowatt-hours, and money of each route and each driver in its fleet. This transparency is a game changer and truly puts the tools fleet operators want but didn’t know they needed into their hands, enabling completely new levels of visibility of their fleets. These tools are not intended to punish drivers, but rather, can be effective tools in enabling the gamification of efficiency within an operation. No longer do fleet operators have to look at top level numbers for diesel consumption or punch cards and electronic logs. In the electric future, they can simply reference the reports kicking out of their telematic system to get the data. It’s easy to imagine. Fleets might have monthly competitions and awards for the most efficient driver on each route, passing along gift cards, free barbecue lunches, and the like to employees as rewards for saving the company money with their efficient driving. Game on!

Fully electric vehicles allow fleet operators to level up their emission reductions and usher in a once in a generation opportunity to rethink the way fleets operate. New approaches to fueling, data gathering, and cost optimizations abound and early movers stand to gain significant advantages over competitors. Volvo is making it easy for fleet operators to upgrade to fully electric fleets and giving them new tools to level up their operations at the same time. At Volvo, it’s clear that the future is electric. The future is now.